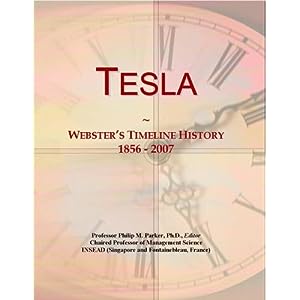 This complete timeline from 1856 through 2007 has been compiled by Webster's to show the use of the word Tesla as a proper noun throughout linguistic history.

You will find in this timeline references that include patents, bibliographies, citations in other books, and other more unusual contexts such as found in culture and society. In Tesla's case of course you will find many references in engineering, psychology, math, law and many other places.

The result is an interesting look from a linguistic point of view at Nikola Tesla particularly, as he has been such an important part of our history during this time period. Tesla has been studied by many for his contributions to electricity and many other inventions. Meanwhile, he has also been the subject of review because of his eccentric behavior and perceived failures as a man.

Shop safe at Amazon and enjoy free shipping if you spend $25 or more.

Join in and write your own page! It's easy to do. How? Simply click here to return to American inventions reviews.